Use deals in HubSpot to track potential revenue through your sales process. You can associate deals with other records, such as contacts and companies involved in the deal. Once records are associated to a deal, HubSpot can associate the relevant activities to the deal record.

To customize how deals are created, learn how to set the properties that appear when users create deals, or how to set a default close date for newly created deals.

Create a deal from your deals index page

To manually create a deal: 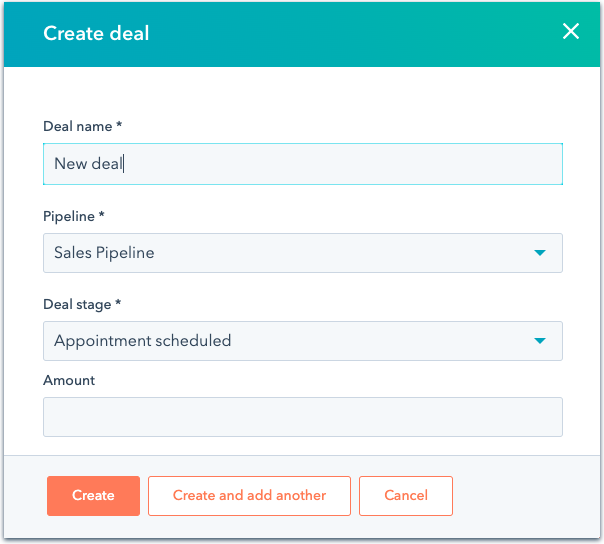 Create a deal on a record

To create a deal from a record you want associated with the deal:

Learn more about associated timeline activities between records. If you want to add existing deals to a record, learn how to associate records.

Create a deal from your Gmail or Outlook inbox

Create a deal using a workflow

Depending on your account's HubSpot subscription, you can use the Create a deal action in the workflows tool to automatically trigger a deal creation when a record meets certain conditions. For example, if a contact meets a certain value in a score property, a deal could automatically be created and assigned to your sales team. Learn how to create deals via workflow.

To set a default close date for newly created deals in the desktop app:

A deal's close date is also automatically set or updated by HubSpot when: