You can use the campaign analytics tool to measure the effectiveness of all the campaigns you've created in HubSpot. Learn more about the data pulled to provide you these metrics and how you can analyze a single campaign in the campaigns tool.

Please note: in order for data from a campaign to appear in the campaign analytics tool, the campaign must have been created after September 1, 2017. 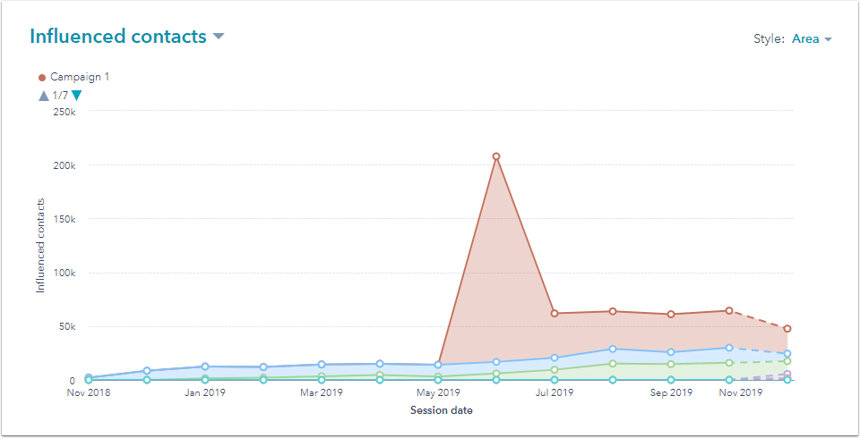 Below your chart, there's a table with metrics for your analytics.

Export or save as report

You can also save the chart as a report in your reports list:

Measures the number of contacts (new and existing) that have engaged with assets related to a campaign. A contact is influenced by a campaign when:

Please note: because of changes related to Apple's recently announced iOS 15 privacy features, your open rates may appear higher than usual. Learn more about how to navigate these changes in HubSpot.

Measures traffic to website assets related to the campaign. Sessions will be attributed to a campaign when:

The number of newly created contacts, attributed to the campaign that brought them to your website for the first time. Contacts will appear in this report when:

The number of newly created contacts, attributed to the campaign that led to their conversion. Contacts will appear in this report when:

The number of closed won deals associated with influenced contacts. In order for a deal to appear in this report: