With HubSpot data sync, you can create a two-way sync for deals between HubSpot and your other apps.

Learn more about what apps use data sync. Deal sync is not available for all apps. Any apps that sync deals will have the Deal object in the Shared data section of the app marketplace listing.

Please note: you must be a Super Admin or have App Marketplace Access permissions in your HubSpot account.

After connecting the app you will need to turn the sync on.

If you do not wish for changes in HubSpot to affect your 3rd-party app’s deal pipeline, select dataSyncRight Data Syncs only to HubSpot.

Map your deal pipelines and stages 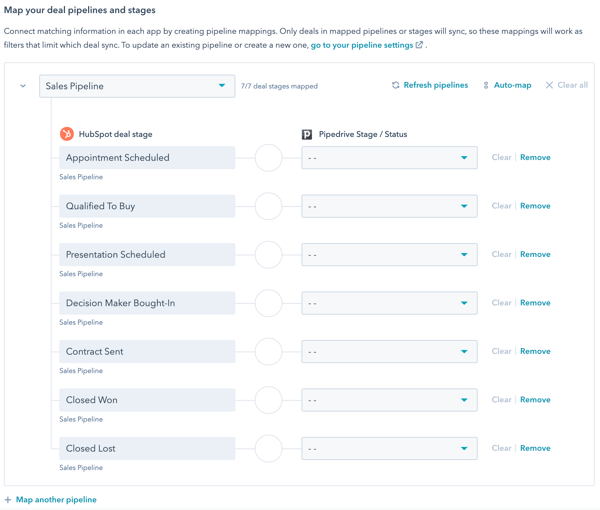 If you’re unable to view deal stages from your other app in HubSpot, it is because of the following reasons:

Please note: if you choose to sync deals one-way between HubSpot and your third-party app, the Resolve data conflicts dropdown will default to the app that data is syncing from.

When deal sync is turned on, any records that meet the filter criteria will be synced immediately. Duplicate deal records are not automatically identified or merged. To separate duplicate records from your existing ones, create a new pipeline in HubSpot and select that pipeline when syncing deals.

If you’re syncing contacts, companies, and deals at the same time, associations between these records will be automatically created. The field mappings screen will show what associations will be created, if any, and which object in your third-party app that the association is being made with.

The integration will not delete deals when they have been deleted in the other app. In order to make sure closed deals appear as such, include a deal stage mapping that helps HubSpot recognize these deals as closed. For example, map the Closed Won HubSpot deal stage with a similar Won stage in your third-party app. 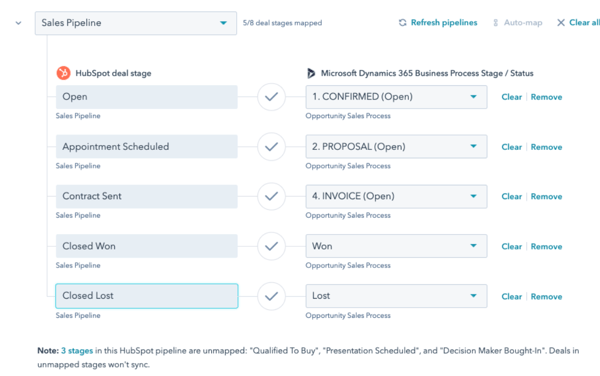 Learn more about how to customize your field mappings for your deal data sync.