If multiple users in your HubSpot account are involved in deals, users with Super admin permissions can set up deal splits. When you set up deal splits, you allow users to share percentages of the amount of a deal. The amount received by each user in a deal split affects their forecast.

Deal splits are useful for salespeople who have a quotas and need to get credit for all of their impacted revenue. To include users who have worked on a deal, but don't necessarily need credit for the deal amount, you can add them as deal collaborators. Users can be included both in a deal split and as a collaborator for the same deal.

Users with Super admin permissions can turn on deal splits in the deal settings.

Please note: depending on the number of deals in your account, it can take a few minutes or up to a few hours to fully set up deal splits.

Add splits to a deal

Once deal splits are turned on in your settings, users with Edit deal permissions can add a split to a deal. 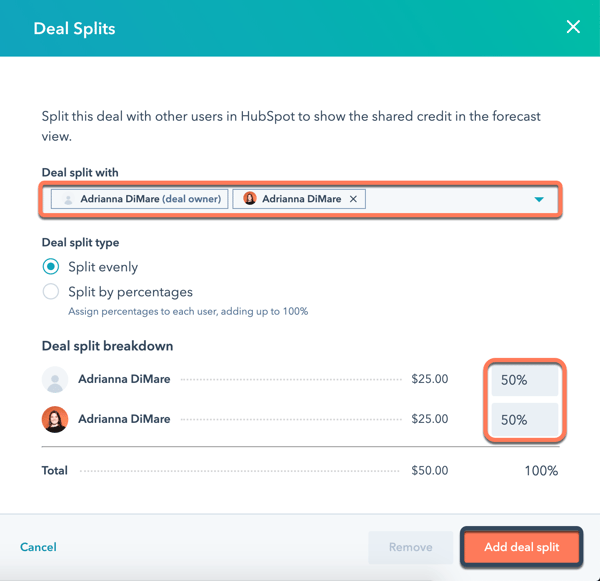 Once a split is added to a deal, you can view the split amount for each user in the forecast tool.

Use deal splits in custom reports

You can also use custom reports to analyze data from your deal splits. For example, you can filter by Deal Split Owner and Deal Split Amount to understand how much credit each user will receive for the deals they are involved in.